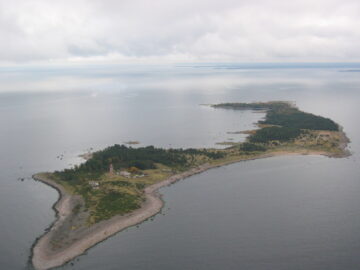 Mohni island (area 62.5 ha) is situated on the territory of Lahemaa National Park, north-east of Eru Bay, 4.5 kilometres from the coastline of Viinistu. The island’s landmarks feature a lighthouse and remains of a Soviet era border guard station’s auxiliary buildings. The Mohni lighthouse was an important guide and a shelter from storms already a long time ago. The island also provided cover for spirits smugglers. The Mohni linden, an ancient tree under protection, grows on the island. It is a remainder of a linden and oak forest that used to cover the island and, according to a legend, was burnt to unveil pirates dwelling on the island.