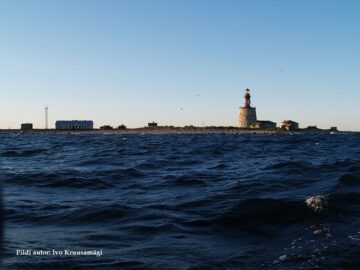 Keri is one of the most northern islands of Estonia with an area of 3.1 hectares and a distance of 30 km from Tallinn. The island is low and is mainly covered with cobblestones, gravel and some sand. The Keri lighthouse built in 1719 is considered the oldest in the Gulf of Finland area. The lighthouse is under heritage protection and is one of the hundred most unique lighthouses of the UNESO world heritage list. The lighthouse keepers with their families have inhabited the island through the ages. The last resident left the island in 2002 and from thereon, the island is looked after by the Keri Society. Until 1902, the residents of the island got their drinking water from a shallow well. The water was salty, so it was decided to make a new driven well. Natural gas was found during the drilling. Ker lighthouse is the first lighthouse in the world that used natural gas to make light.

During our trip to Keri, we inspect every corner of the island, see how a modern lighthouse operates and what Estonia’s most northern sauna overseeing the Gulf of Finland looks like. We peek into an island home, watch an exhibition and hear a lot of exciting stories.